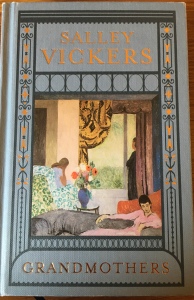 I’ve long been a fan of Salley Vickers – since a friend lent me her copy of Miss Garnet’s Angel (probably Vickers’ most popular and well-known book) as I was heading off on a holiday to Venice in 2006. I loved the book so much I had to buy my own copy and then lent it to others who were visiting Venice. I also very much liked The Other Side of You, but on the whole, the more recent books haven’t made quite the same impact on me as the early ones, although I’ve enjoyed them.

A friend mentioned Grandmothers to me a few months ago. As doting grandmothers she thought we should read it. I waited a while to see when the paperback would come out (I rarely buy hardbacks and don’t like reading novels on Kindle), but as it won’t be until September 2020, I gave in and bought the hardback. I knew the book had received mixed reviews so approached it with some uncertainty about what I’d think.

One of the things that appeals to me about Vickers’ writing is her background as a Jungian analyst. This might suggest that her writing is heavy going but in fact her books are easy reading, in the sense that they flow and are very accessible. What her psychotherapist background gives her is a deep understanding of how people think, how they react to events and situations; how their experiences in life have led them to be the people they are now; how relationships work – or don’t work. Thus there are always moments of recognition; moments when you know she’s caught exactly how someone would feel. This is usually just one sentence that is so well put together that it stops you fleetingly and you think ‘oh yes’ or ‘but of course’.

There are similar moments in Grandmothers, though not really startling or new thoughts that you’ll take away with you as precious revelations on the workings of life. Vickers knows that ‘Children understand better than people give them credit for’, that one of the hardest things to grasp is ‘that other people see life from a perspective often quite unlike one’s own’ and that ‘the whole business of meting out blame was a mistake. Blame was a displacement activity, a means of avoiding the recognition that very little in life was in your control.’ She asks whether it is ‘sadness that made people kind – or was it that kind people were more liable to sadness?’ But these are more neat little summings up of what we already know rather than words that make us think deeply.

There are three grandmothers in the book and rather an odd bunch they are. They are not particularly likeable; one, Nan, is particularly difficult and fierce. Their overriding feeling is that they know better than the parents of their grandchildren, but the wisdom of their long lives and experience is not appreciated. They come from dysfunctional backgrounds, carrying long held griefs (that one feels a bit of psychotherapy should have sorted out years ago) and their young families are equally dysfunctional. This all gives a sense of the characters being formulaic, mere vehicles for some of Vickers’ ideas, and thus a little too one dimensional.

So … I quite enjoyed the read; it was an easy read and engaged my interest enough to want to read on (and I do give up on books I’m not enjoying!), but it was a disappointment; it didn’t feel like a book that came from the heart. And as a book about grandmothers, it should have had a lot of heart.