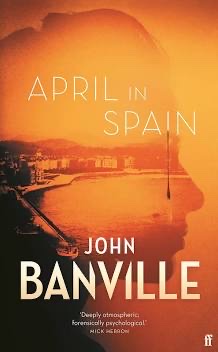 I’ve just read another John Banville crime novel. It was this latest one that first interested me when I read a review and then I ended up also buying the preceding novel, Snow, to read first (click here for my review). I was also attracted by its setting in San Sebastian, Spain, a place I’ve visited and really like (see my food & travel blog: 48 Hours in San Sebastian). Who couldn’t be tempted to be transported to a bit of Spanish sun during these dull and grey winter days, albeit virtually.

April in Spain is another Detective Inspector Strafford novel set in the late 1950s, but in this one, Strafford takes a back seat and plays only a small part, and it is Dublin pathologist Quirke on whom the story centres. Quirke is on holiday in San Sebastian with his wife Evelyn, a psychiatrist. It is a second marriage for both and rather a strange match. Quirke, an alcoholic who has got his drinking almost under control, is often petulant and cantankerous and holds dark secrets about his orphanage childhood. He is not an immediately likeable character. Evelyn, is an Austrian who survived the Holocaust and refuses to talk, even to him, of her tragic past; she is not easy to like either. Their relationship has a combative edge, she the cool psychiatrist who always has to have the last word; he the bad-tempered and difficult man. Yet Banville creates a portrait of a loving and gentle relationship that makes sense of the marriage and forms an engaging thread to the novel.

Quirke is like a sulky child in his behaviour about being on holiday; he hates holidays. But then something very unexpected happens. When an accident (trying to shell oysters) takes him to the local A&E, he spies a woman doctor who seems familiar. She quickly disappears after seeing him and another doctor comes. It takes him a while to make the connection, but he feels certain this is the young woman, April, a friend of his daughter Phoebe, who supposedly died four years’ ago, murdered by her brother. When attempts to find out more about her prove impossible, he calls Phoebe who flies in from London to see if it really is her friend. But first she speaks to the police, and this sets in train a terrible and shocking set of consquences.

Strafford is sent with Phoebe – as a protector? To find out more? Meanwhile, we follow the story of Terry Trice, a hit man, who is also sent to Spain.

Behind April’s story lies a tale of incest, and political and moral corruption. These are themes that Banville likes to explore and which make his crime novels different – as well as his stylish and elegant writing. In Snow, it was the corruption and hypocrisy of the Catholic Church that came under his critical eye, this time it is the Irish state itself.

This is in no sense a genre ‘crime novel’. I’d describe it more as a novel in which there is a crime theme. While the ‘crime’ thread contains terrible stories of violence, abuse and corruption, it is not the kind of crime novel in which the reader can follow clues and hope to guess the murderer before the end. The ‘novel’ side, the part that is essentially Banville, contains wonderful insights into characters and their workings; a moving intimacy in the way the Quirkes’ marriage is drawn; and there are beautiful descriptions of its Spanish setting: ‘Darkness, when it fell, fell rapidly … they would stop and lean on the rail above the beach and gaze out over the bay, as black and shining as a vast bowl of oil and scattered with the reflections of lights from houses on the hill on the right, or from the little island of Santa Klara at the mouth of the  bay.’ Such descriptions took me right back to San Sebastian.

While there is something about Banville’s characters that I find slightly unreal and even at times clichéd, the book is so rich in its complexity, so beautifully written and engaging, that I found it – like Snow –  to be the kind of book you can hardly put down and want to keep on reading right to the end.